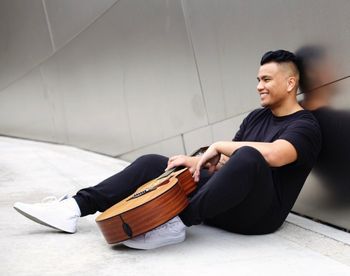 In the fall of 2010, he made the decision to leave college in pursuit of a full-time music career; in the same year, he wrote “Alcoholic” and “Wade In Your Water” which became hit songs for the group Common Kings. The success of his songwriting led to the release of his first single “Born and Raised” in 2011, the single became a popular song and was strongly supported on Hawaii radio and within the Hawaiian community and birthed the artist Bo Napoleon. 2015 brought another major stepping stone in Bo’s music career with “If That’s Ok” released in Hawaii. The song has gained amazing commercial support and has been quoted by Jamie Hyatt – KDDN-FM iheartmedia’s flagship reggae station as “the song transcends format boundaries; #1 test all media research, #1 single sales, #1 Shazam “ and is in Power rotation at Hawaii’s KPHW Power 104 as Wayne Marie has championed the record in the market place and proven the record in CHR Rhythmic format. “That’s Ok” has gained tremendous momentum and interest from major record labels and the interest of A&R extraordinaire Selim Bouab. With influences like Bob Marley, Max Martin, Kanye West, Craig David, Ne-Yo, Bruno Mars, Fiji, and his father Nappy, who is Bo’s idol and well known Hawaiian singer and Hula dancer. It is easy to recognize how Bo’s wide pallet of music and unique writing ability has molded him into one of the special singer-songwriters that can resonate with the masses.