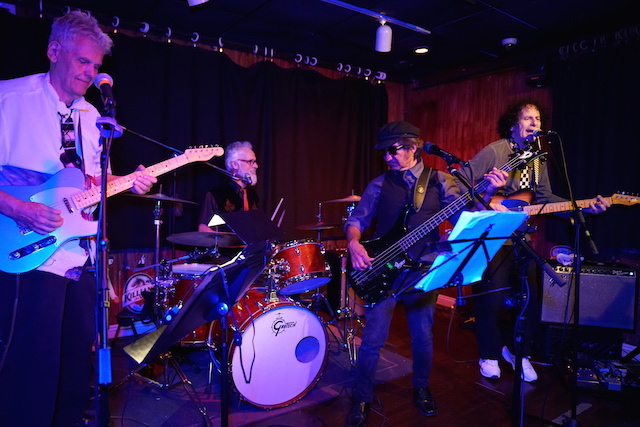 jackiO has been called an “L.A. Supergroup.” And, for good reason.
This quartet of seasoned performers have been there and back. jackiO musicians
Steve Bartek -guitar, vocals (Oingo Boingo, Strawberry Alarm Clock, Danny
Elfman), John Avila -bass, vocals (Oingo Boingo, Neil Young, Lukas Nelson), Ira
Ingber -guitar, vocals (Bob Dylan, Captain Beefheart, Bonnie Raitt, Brian Wilson),
David Raven -drums, vocals (Keith Richards, Lucinda Williams) have more than
just world-class resumes that set them apart from other notable bands.
Individually as well as collectively they continue to be sought after for music
projects at the highest level in the industry. One recent example finds jackiO
recording and performing with country/Americana music legend Lacy J. Dalton on
her new EP, “Scarecrow.” Another finds Ira performing as both singer and
musician on the hit Starz Network show, “Outlander.” John (on bass) recently
performed with Red Hot Chili Peppers bassist Flea in a virtuoso concert
appearance. Steve is currently orchestrating the score for the new Tim Burton
film, “Dumbo.” David has been performing with musician/actor Creed Bratton
(The Grass Roots, t.v. show The Office).
jackiO members played in various combinations together prior to the formation
of the band over four years ago. But, until that time they had never played as a
quartet. When they finally did, the magic, exuberance, and sheer joy of making
great music together was instantly recognized by everyone in the room.
And so, it continues with the creation of vital new music, and dynamic live shows
that elevate jackiO into a league of their own. Their new EP, eponymously titled
“jackiO” will be dropping on February 22, 2019.