DRAG ME TO BRUNCH 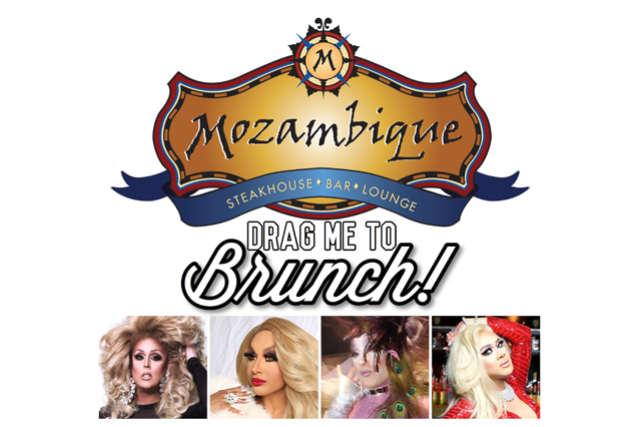 From local to internationally known Drag entertainers and in between, Drag Me to Brunch at Mozambique is an exciting experience you don’t want to miss!

Celebrity Impersonations, High Energy Dance, Comedy, Drama is just the start of what’s to come! Join the talents of:

Willemina Caviar, performer in many popular venues in Orange County, Long Beach, Los Angeles, San Diego, Palm Springs to name a few. She has been in the industry for eight years and counting. You may catch her performing and hosting on a weekly drag revue at Main Street Bar and Cabaret, right in the heart of Laguna Beach.

G Licious G, has been in the “circuit” & club scene as a featured Drag entertainer for the past 20 years both on stage and behind the scenes. Texas born Hair and makeup Desginer by day, G Licious wows the crowds with her colorful costumes and phenomenal makeup looks and high energy performances is something you surely don’t want to miss!

Raquel Blake, is a native of Boston, Massachusetts but has called Dallas, Texas her home for the past 5 years. Don’t be fooled by her beauty, because she’s got the mouth of a sailor and a quick whit to boot! 17 years in the business of female impersonation and going strong. Raquel can be found ALL OVER Dallas, surrounding areas and then some…Raquel is so excited to share her talents and colorful hosting abilities with everyone in Laguna Beach!

Vancie Vega, from being the first Madonna in Las Vegas to opening for Taylor Dayne and Billy Gilman, this three-time Miss Texas beauty queen has traveled the world with her spot-on impersonations of a multitude of famous women.  Vancie is an accomplished singer, dancer, comedian and now makes her home Southern California.